The Advantages of Building a Decentralized Future - Zellim

The Advantages of Building a Decentralized Future

There are many spaces where decentralization has already become possible and necessary. There are various blockchain projects that bring so much hope in the lives of people, such as cryptocurrencies, open-source software, smart contracts, etc.

We are moving into a new world order that will be more secure and more flexible because it puts control back into the hands of the individual. In a decentralized future, no one single entity will be able to control the whole system. People value and protect their privacy, security, and social equality.

Decentralized systems are a new way of organizing the internet by distributing data and power. This is emerging as a new paradigm that will revolutionize commerce, politics, governance, and more.

Decentralization is a buzzword that has been thrown around by a lot lately. It’s often used to describe Bitcoin, Ethereum, and other cryptocurrencies, but the definition of decentralization can be applied to just about anything.

Decentralization is the process of dispersing functions, powers, people, or things away from a central location. This process also includes decentralizing data and information.

Decentralization means that no single individual or institution has the power to control a particular platform. The benefits are an increase in transparency and a decrease in risks of corruption.

Uses Cases for a Decentralized World

There are many worldwide uses for decentralization that are still unexplored. However, a handful of entrepreneurs and researchers are already pioneering this digital transformation.

In the last couple of years, we’ve seen a number of decentralized startups and organizations emerge. These visionary companies are changing the way we live, work, and communicate. These changes are as fundamental to society as the ones introduced during the industrial revolution.

Decentralized autonomous organizations represent the next step in business. They offer a solution to many of the major problems associated with traditional hierarchical management, such as:

– Trust and reputation issues, especially when it comes to data or financial transactions. Decentralized organizations have a reputation system that is needed for all interactions. This system prevents trust issues.

– Inefficiency in decision-making, as too many levels of management can slow things down and lead to mistakes. Decentralized organizations are automated and more efficient because there is no need for managerial interference.

– Need for a large number of intermediaries (middlemen) who take a cut of the transaction value. In decentralized organizations, there is no need for these middlemen, as everything is done peer-to-peer.

Data is the new oil.

Facebook is one of the most popular social media platforms with over 2 billion monthly active users around the world. And they know WAY too much about you. They have as much as 300 pieces of data on every person. They sell that data to third-party companies and use it to target ads at you. This demonstrates why data should not be stored by any single entity

It is worth noting that Facebook has the right to sell your data anytime they want because it’s their property. They are also able to give your data to third parties in a way that protects them from being sued. The problem with centralized data is that it is under the control of one party and can be bought and sold at will. There are many privacy risks but this happens on a regular basis without much concern for users.

In order to find a way around the problem of centralized data, it is useful to look at other industries where data storage is decentralized.

Let’s take a look at the difference between how centralized and decentralized data is handled: 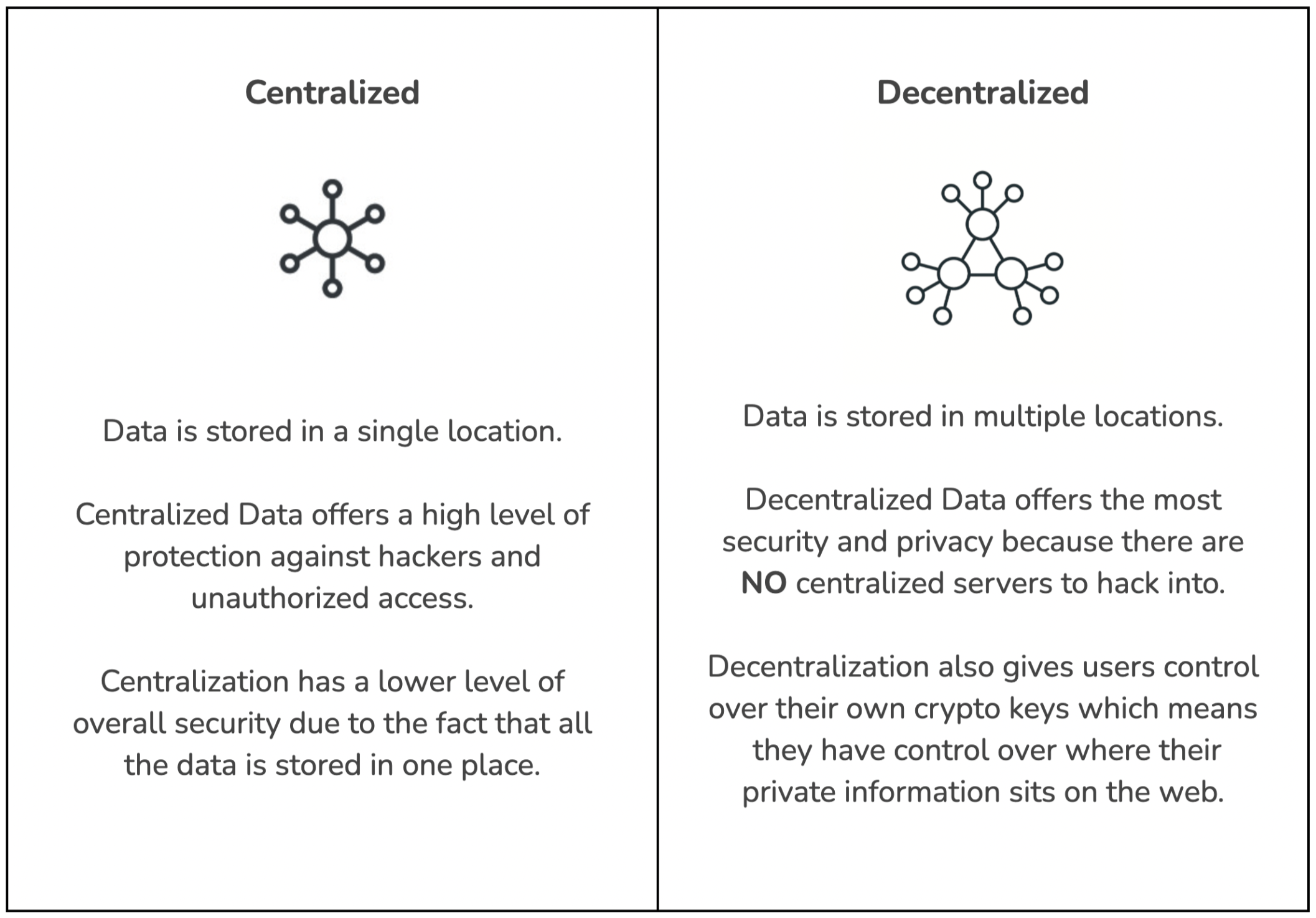 The main benefit of decentralized data is the fact that there is no central point of failure. There is also a feeling of greater ownership when you are in control of your own data and can decide for yourself who to share your personal information with.

The decentralized apps (DApp) are a new type of app that runs on a network of computers all around the world.

Users can take control and directly access their data through the use of blockchain technologies. This means that they don’t have to worry about other parties gaining unauthorized access to their personal data, or relying on some third-party organization to store it safely.

Blockchain technology also offers a decentralized approach to registrations and records which has made it popular in industries like finance and healthcare. However, blockchain’s potential extends far beyond just these two industries.

Industry leaders in tech, such as ClearSoftware, use blockchain for digital property rights management and storage of sensitive data. This is just the beginning of the era of decentralized applications. In the future, decentralized apps will be available across all platforms and provide users with control over their data.

Decentralization is an Advancement Mankind Needs, Here’s Why:

The centralization of any system is structurally flawed.

There is a lot of power in centralized organizations and companies. They make all of the decisions for you. Luckily, as time goes on, people are recognizing and advocating for change.

The concept of a decentralized world where no company, institution, or even government has too much power or control is not new. But, due to recent advancements in technology, it’s now becoming a reality that’s entirely possible.